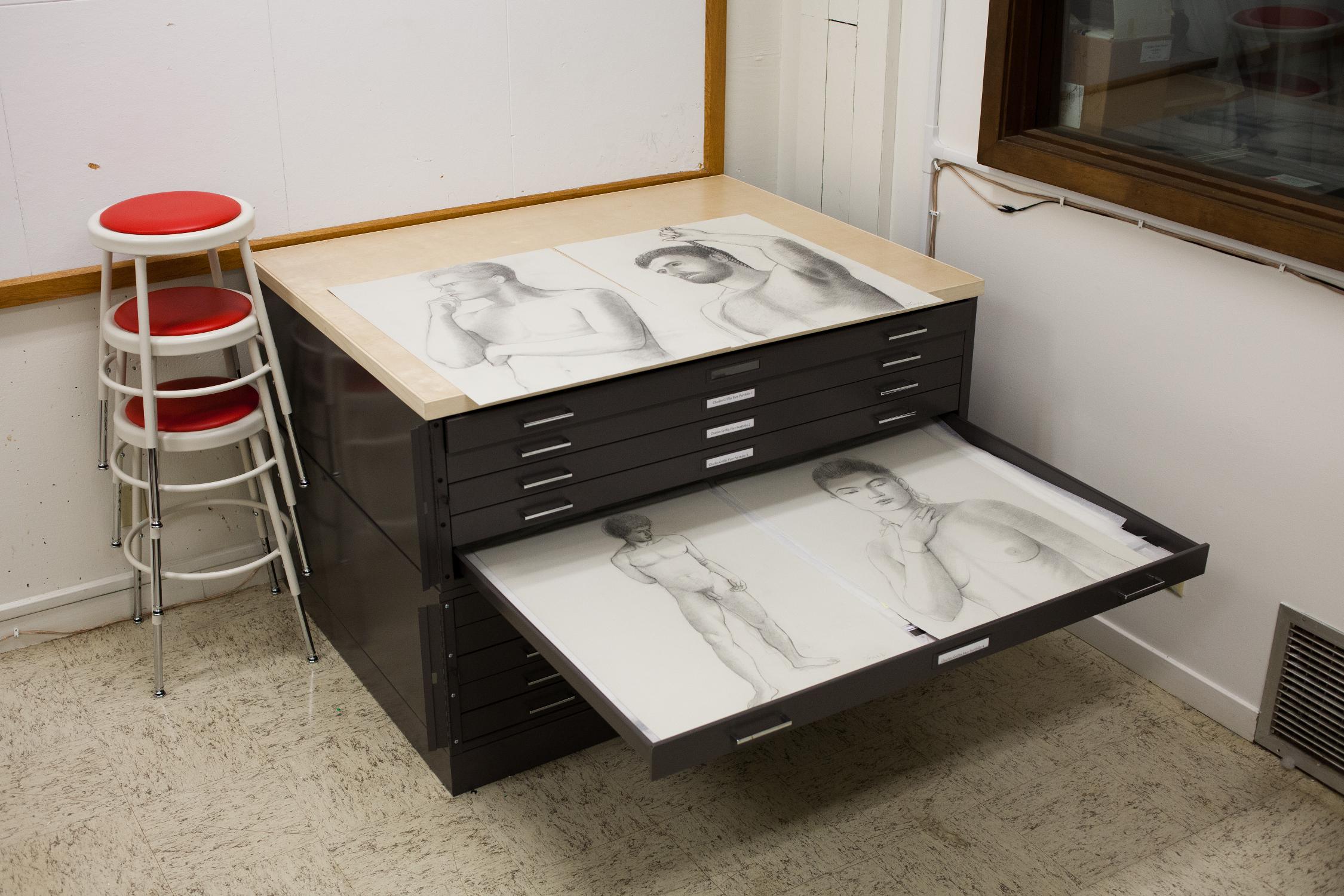 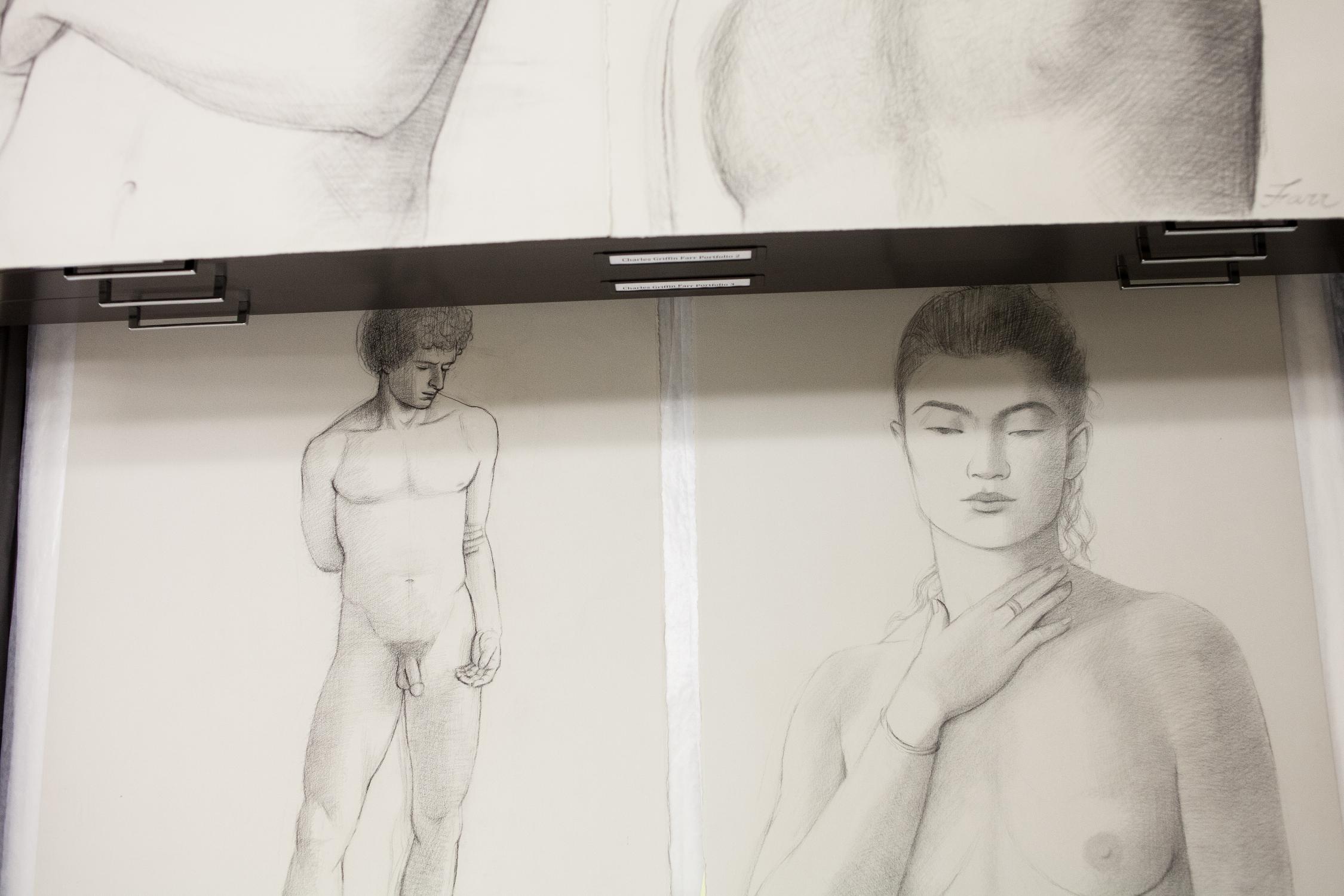 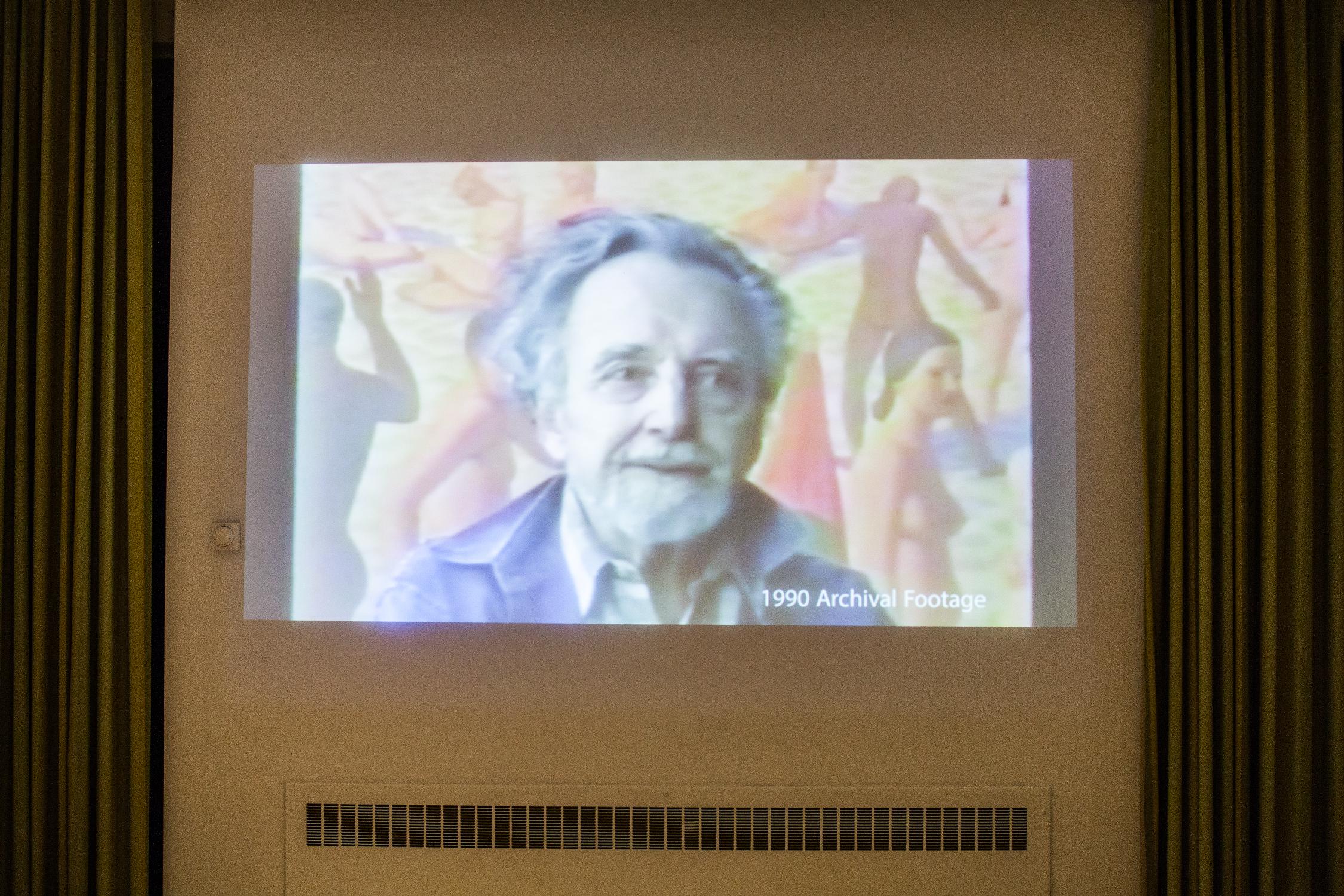 “People walk by Charles Griffin Farr’s stylized landscapes at the University Center in the rotunda all the time…. Less visible is the collection of 500 figure drawings by the artist in the Farr Screening and Drawing Room in the Sesnon Underground.”

In Conversation With Shelby Graham

Charles Griffin Farr (1908-1997) was an American Realist painter, who worked from life. He witnessed and rendered the American Depression in the 1930s, World War II in the 1940s, a charged art scene in San Francisco in the 1950s-1990s and a vibrant neighborhood of creative people living on Potrero Hill.

While Farr is most known for his paintings, some of which are the landscapes on display on campus, the over 500 figure drawings and works on paper that are in the Drawing Room show his astute attention to the historically-specific realities of his lifetime. As he drew from models across gender, race, and class lines, his work gives a glimpse into how he viewed the diverse community in San Francisco he was embedded in.

There is an unhurried controlled confidence in his line drawings of everyday scenes, capturing a glimpse of social realism. Farr possessed an unwavering, almost calming, internal vision that he applied to both landscapes and figure drawing. Looking through the collection,you can see how this vision and confidence transitions from his line sketches from the 1940s into his later figure drawings. This confidence stems in part from Farr’s commitment to a daily drawing practice. He was a prolific artist, working daily to hone his techniques.

Charles Griffin Farr was also a proponent of the importance of the arts. He offered weekly figure drawing sessions in his Potrero Hill studio and home. Farr also organized a local art show at the San Francisco Public Library, Potrero Branch, called the Potrero Hill Artists’ Exhibition in 1958. This is the oldest annual art show in San Francisco and owes its longevity to a group of artists who painted with, or under the tutelage of Farr. This exhibition is credited with helping to save the Potrero Branch of the library from being closed during budget cuts.

In fact, his commitment to the arts and to preservation is his enduring legacy. During a decade of declining budgets in California affecting the University of California (cuts in 2004, 2008, and 2013), the Charles Griffin Farr Fund has enabled UCSC’s modest Sesnon Gallery to bring in numerous visiting artists, engage thousands of student scholars, and embrace innovative collaborative projects and share the work of Charles Griffin Farr. After learning that Farr motivated a group of his students and colleagues to mount an exhibition to help preserve and promote the Potrero Hill Library branch, I feel we are following his mission of collaborating to preserve the arts.

The Charles Griffin Farr Collection is open to the public by appointment and viewed as a teaching collection for UCSC art classes. The Sesnon Gallery mounts an exhibition of Charles Griffin Farr works every 4 years with the help of undergraduate students. For more information: http://art.ucsc.edu/galleries/charles-griffin-farr-collection-ucsc