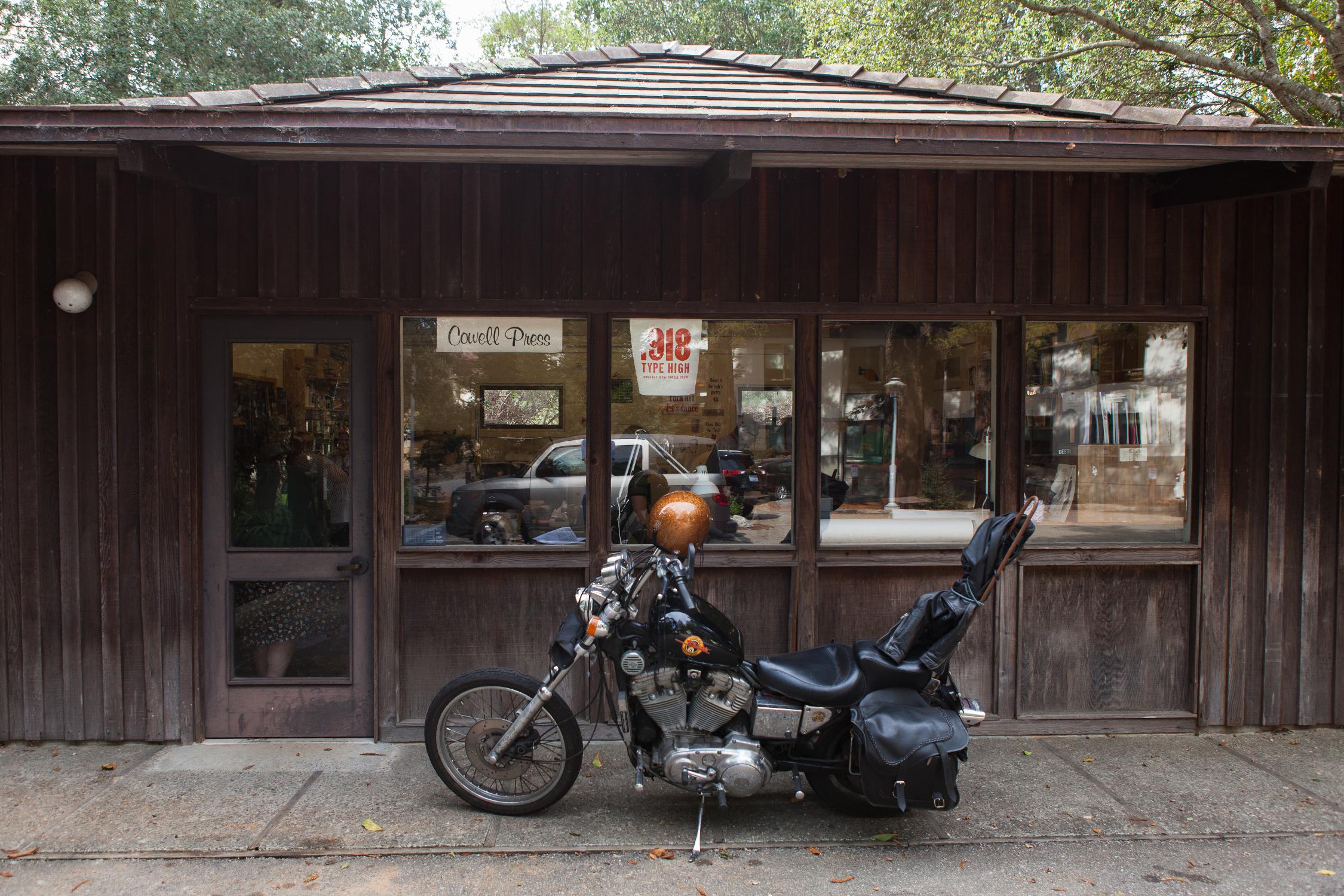 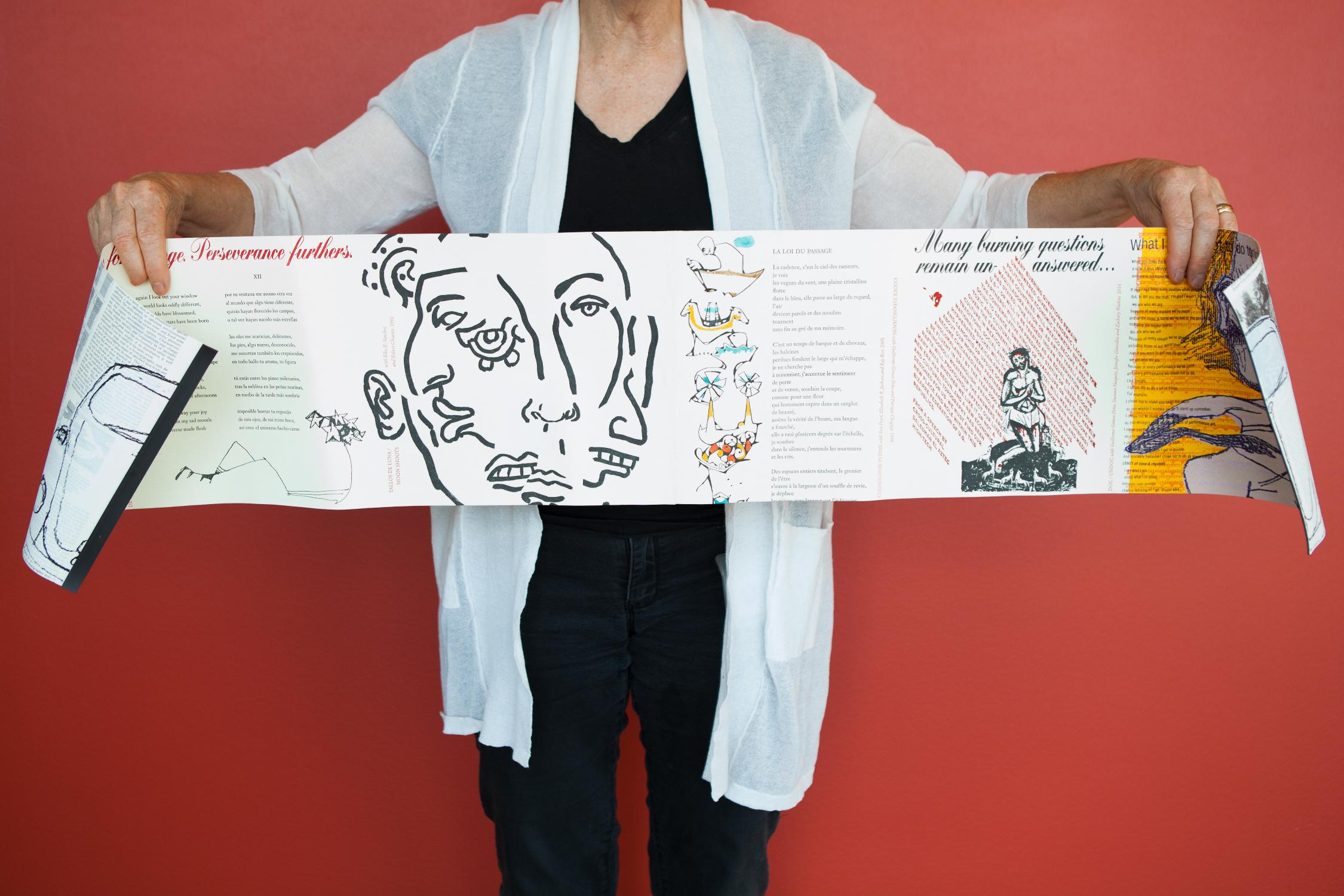 “It’s 40 years later, and most everything I do now is still seeded by my experience at the press. I still make books and publish books and work collaboratively with writers and artists. I did a piece this summer.”

In Conversation With Felicia Rice

I came to Santa Cruz to work at the Cowell Press. It was 1974, and I had been living in the Bay Area. It was a fluke that I learned about the press at UC Santa Cruz. My mother sent me a newspaper story about it accidentally– she meant to send it to my sister. I happened to be living around the corner from a very fine printer, and I walked by his studio every day, catching glimpses of the goings on. The print shop really captured my attention. My parents were both artists and had introduced my to lots of art forms, but here was something that was a little bit different– quite a bit, actually, and I thought I’d try to make my way in something that wasn’t theirs.

So, I came to Santa Cruz to check out the school. I walked into this small room under the Cowell Dining Hall where the press was located at that time, and there was a young woman and a man printing a book, Chamber Music by James Joyce. The pressroom had a certain smell. I was drawn to that. The paper…the tactile words…this was exactly what I had in mind. And, where the press was located then had this incredible view of Monterey Bay. Not only could you focus in on your work, but you could look up and see the ocean. I thought I had died and gone to heaven. I was 19.

It took me a while to get into school, but until I did I was able to audit the printing course taught by a very fine typographer, Jack Stauffacher, at the Cowell Press. I was one of around 8-12 young people who worked collaboratively with first Jack, and then with other instructors and each other.

What did I learn from at the Cowell Press? Really, I learned the value of working with my hands, the value of craft. And, in the time the press has been used for teaching here, that skill has been both venerated and denigrated. But, still, the teaching has continued. I learned to set type by hand from a typecase design dating from the 1450s. I learned to place the type in the press bed and how to control the inking and the impression to produce printed sheets in small editions with the letterforms impressed into the page. I studied both at the Cowell Press and with the poet, William Everson at the Lime Kiln Press in the McHenry Library. Actually, one of the first books I worked on was a Lime Kiln Press publication called Granite and Cypress, The Collected Poems of Robinson Jeffers.

My history at the Cowell Press went on long after I graduated. I substituted and taught at the press. I established Moving Parts Press in 1977 when I was still a student. Actually, most everything I do now is seeded by that first experience at the press. It’s 40 years later, and I am still pursuing the work I started there. I still make books and publish books and work collaboratively with writers and artists. I did a piece this summer called Autodidactica: A Chronicle of Cars and Books. It’s a scroll 9 inches high and 48 inches long. It includes reproductions of 6 pages from 6 books dating from my first publication in 1981 to my most current book. You can see how my practice has moved from being almost exclusively typographic to very colorful and visual. The other side of the scroll is sheets of the encyclopedia overprinted with sketches of all the cars I’ve owned over those years, what years I owned them, and what models they were. There is a magnetic strip that allows the scroll to be connected into a ring with the cars on the outside and the books on the inside. The important lesson that comes out of all this is printed in large type and says, “Stability is the platform for change. Perseverance furthers. Many burning questions remain unanswered…”