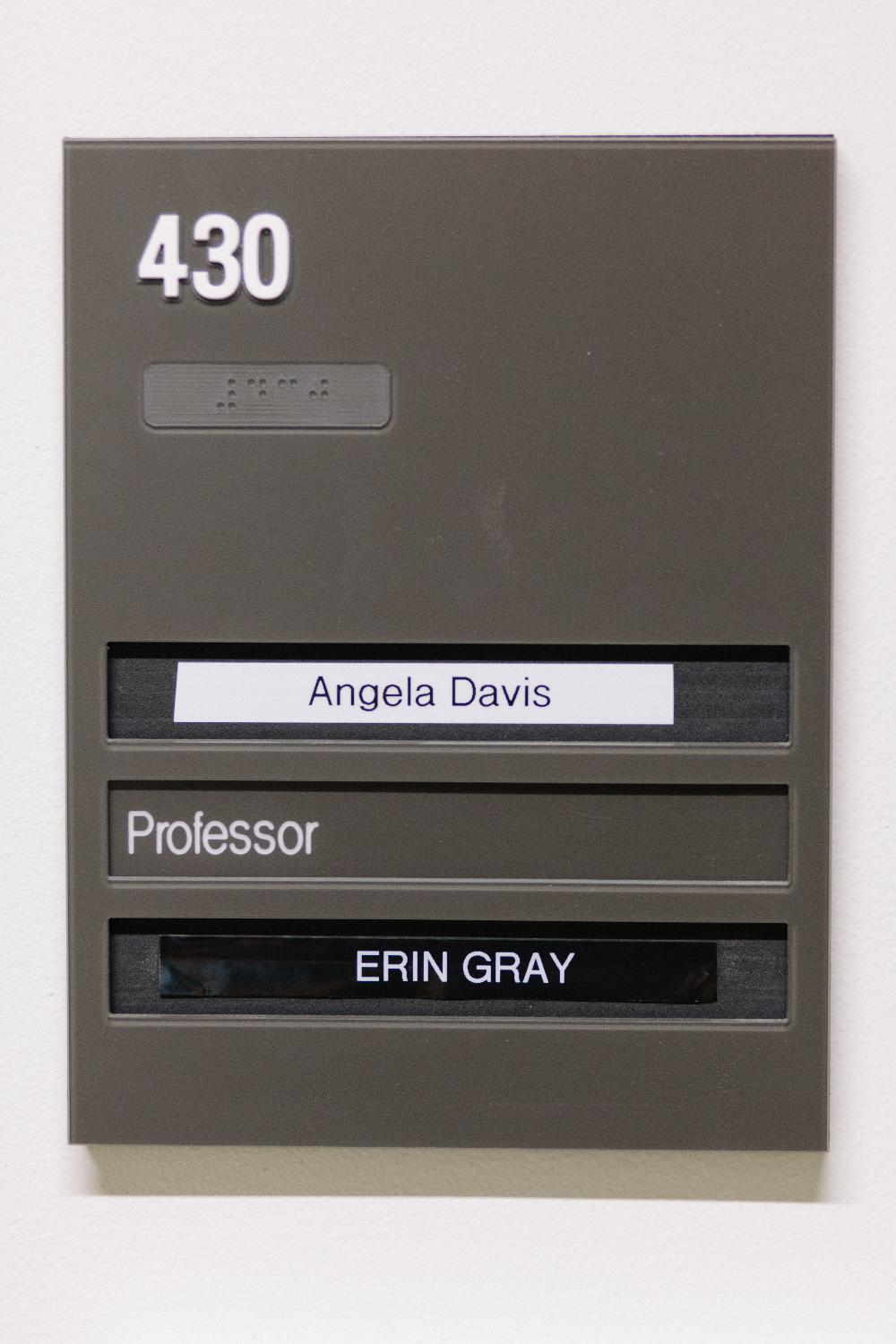 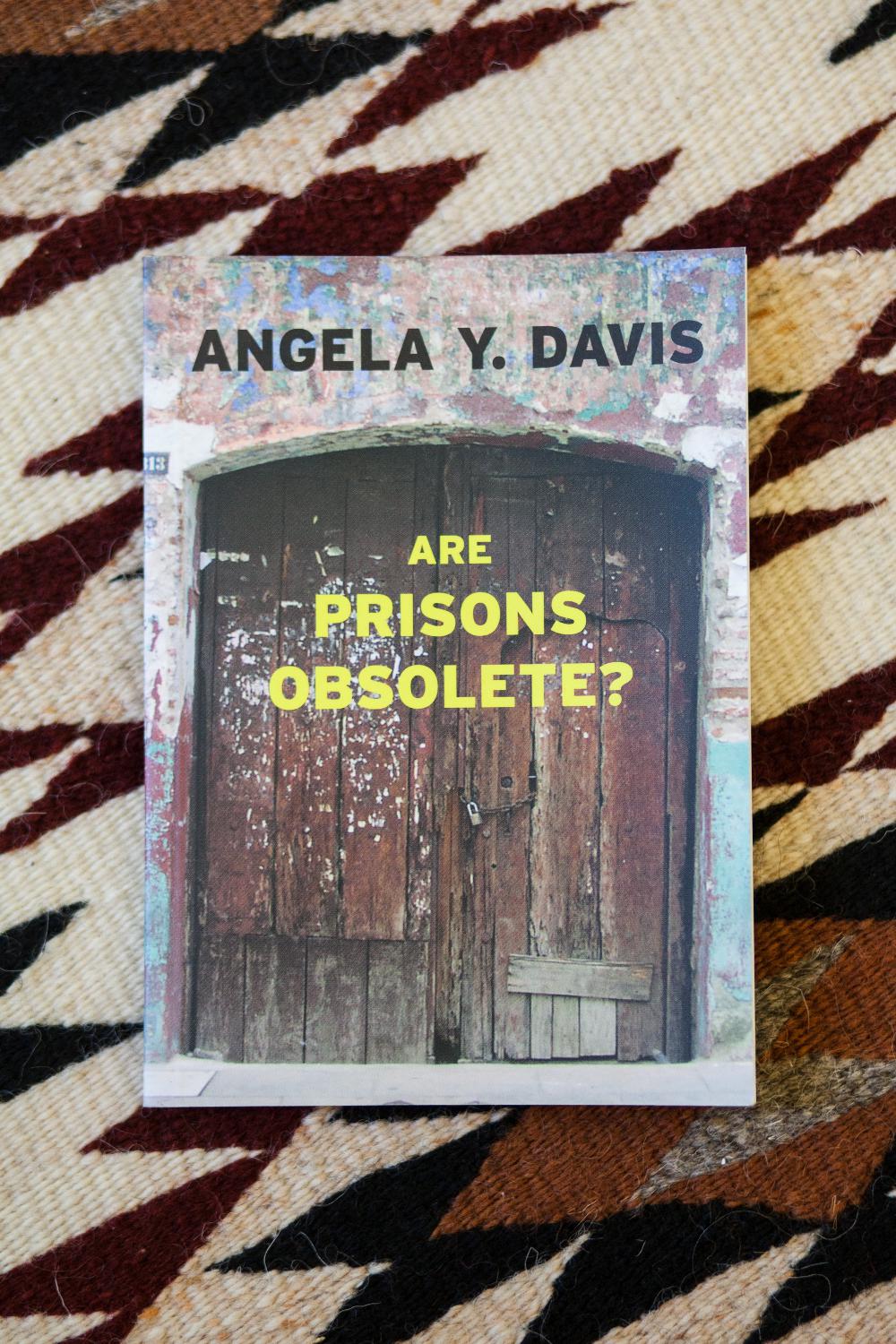 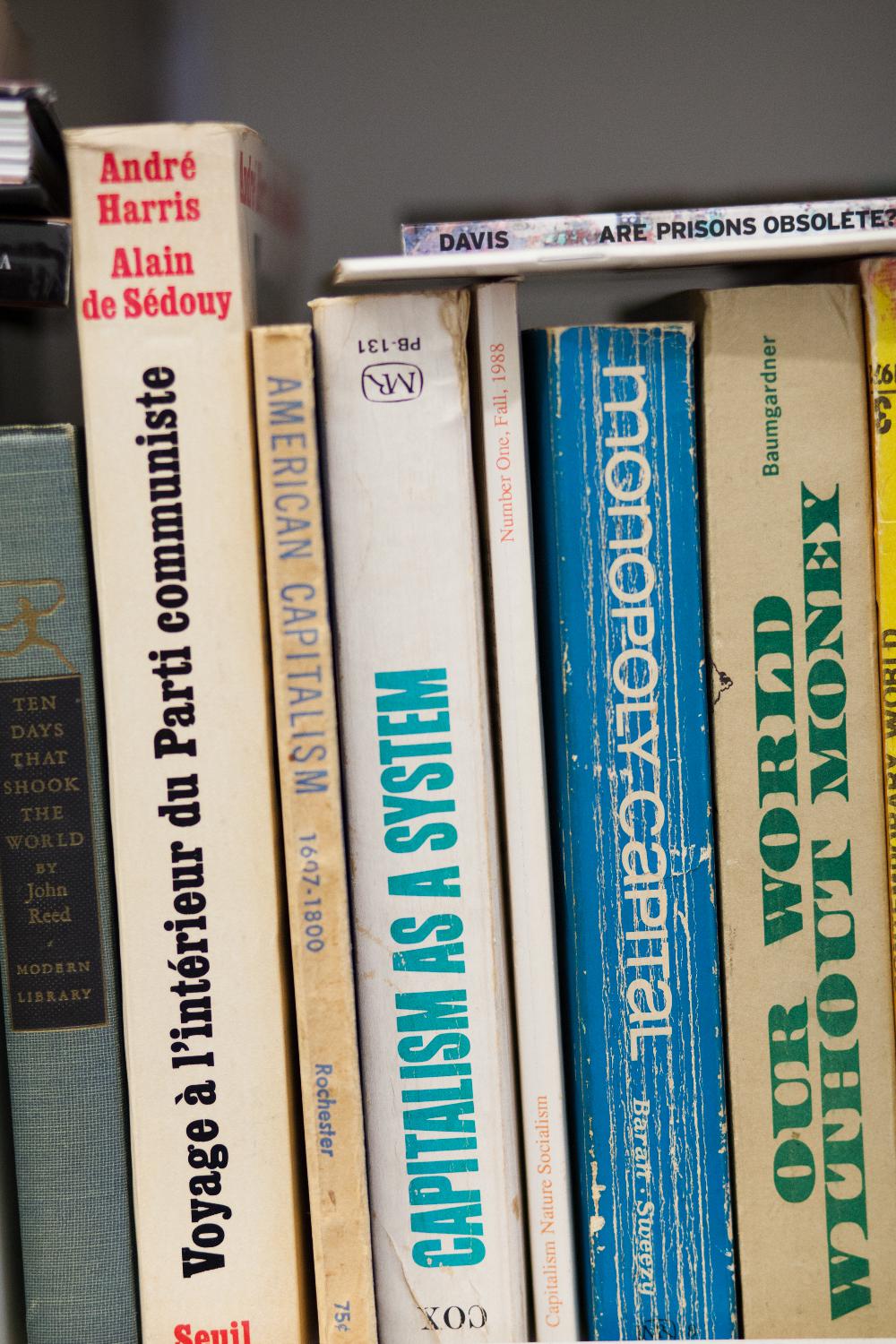 “When I was taking a class with Angela, she invited me to come to office hours to talk about my research on U.S. lynching culture. The following year, the program asked me if I wanted to use this office. I was like, ‘Well, yeah, I’d love to share an office with Angela Davis.’”

In Conversation With Erin Gray

My name is Erin Gray, and I’m a PhD Candidate in History of Consciousness here at UC Santa Cruz, with two designated emphases: one in Feminist Studies and one in Visual Studies.

I was admitted to the HistCon department in 2009 to pursue research in U.S. political violence and visual culture. I applied to HistCon because I’d been interested in the department throughout my education at York University in Toronto, where I studied English literature and Social and Political Thought. As an undergraduate and Master’s student, I was exposed to radical political philosophy through York’s adventurous English department and its Marxist Political Science department. During my time at York, I read a lot of the theorists who taught in HistCon, people like Donna Haraway, Teresa DeLauretis, Jim Clifford, Hayden White, and, of course, Angela Davis. After finishing my MA in 2007, I spent some time writing and publishing essays on feminist poetry and poetics, editing an activist journal called Upping the Anti, and travelling around Central and South America. By the following year, I felt compelled to apply to PhD programs in order to pursue research on white supremacist visuality and the legacies of U.S. lynching culture.

Pursuing doctoral study around white supremacist visual culture necessitated that I work in the areas of black studies, visual studies, feminist studies, and critical theories of the state and biopower. And since I had already had a rather unruly interdisciplinary undergraduate and master’s education, I was attracted to PhD departments that would allow me to work across the humanities, social sciences and the arts. HistCon had been on my radar for years as a site of innovative theorization rooted in social justice frameworks and dedicated to anti-disciplinary collaboration. I relished the idea of learning from and collaborating with feminist intellectuals like Angela Davis, whom I’d admired for years.

When I was becoming radicalized as a teenager – reading about the political explosions of the 1960s, rejecting factory farming, writing incendiary newspaper articles about the corporatization of my high school, and learning about the colonial projects that continue to shape Canada and the U.S. – my dad starting calling me his “little Angela Davis.” I remember being around 15 or 16 and not knowing who this person was or why my dad was comparing me to her. I picked up her autobiography when I was 17 and I remember reading it on the bus on my way to work. I was intrigued and inspired by her dedication to freedom struggles all over the world, her support of the black liberation movement and of political prisoners, her involvement with the Communist Party, and her trenchant intellect. I eventually saw her speak at the University of Toronto in the early days of the second Iraq war when I was organizing against Canada’s support of U.S. belligerence in Iraq and Afghanistan and the occupation of Palestine. At that time, I never imagined that I’d one day study with Angela Davis – that I’d take seminars with her and have her on my dissertation committee.

I’ve taken two classes with Angela in seminar room 420, where many of the HistCon seminars gather. In my first year as a PhD student in HistCon, I took Angela’s “Theories of Slavery” class, in which we studied the historical and theoretical relationship of slavery to the law, to the development of U.S. capitalism and imperialism, and to the explosive growth of a punitive and racist prison industrial complex. In my second year in the program, I enrolled in Angela’s “Marxist Critical Theory,” which was one of the last classes that Angela taught at UCSC before her retirement. This class ended up being the best graduate seminar I’ve ever taken. I was totally ecstatic to read Marx and Antonio Gramsci and Rosa Luxembourg and some of my favorite German Marxists from the Frankfurt School with Angela and a group of dedicated and nimble graduate students. HistCon is considered one of the primary places in the U.S. to study Marxist theory and the history and politics of capitalism, and I was really fortunate to think about U.S. political economy and the philosophical and political legacy of Marxism with someone who has carried the torch, so to speak, over the last half century in one of the most virulently anti-communist countries in the world.

Both of the classes I took with Angela influenced the shape of my dissertation, which situates white supremacist terror at the core of U.S. bourgeois democracy by inquiring into the ways that lynch law, as a technology of racial control, has generated a "regime of sensibility" that continues to structure U.S. security culture. I'm essentially arguing for a closer examination of the relationship between lynching and the capitalist state through analyses of understudied, ignored, and/or censored lynching photographs, U.S. imperial political cartoons from the late nineteenth century, sculptures, installations, and films from the 1960s that address the relationship between lynching and U.S. empire, and present-day reenactments and performances that call attention to the brutal legacies of lynching. It was in “Theories of Slavery” that I first encountered some of the thinkers and texts that have become intellectual touchstones for me, such as WEB Du Bois’s Black Reconstruction, which is an analysis of Southern Reconstruction that focuses on the revolutionary struggles that were carried out by black people during and after the civil war. In “Marxist Critical Theory,” I began to think more seriously about the impact of an individualizing, capitalist episteme on most Americans’ inability to reckon with the memory and continued experience of racial terror. The historical memory and afterlife of lynching and its relationship to current forms of anti-black violence has been distorted by the idea that emancipation was completed in 1865, that the civil rights movement of the 1960s was triumphant, and that the mass incarceration of black people in this country is a result of individual and cultural failings rather than structural forces of domination that aim, by any means necessary, to maintain the white supremacist status quo.

I’ve learned from Angela that the project to abolish racial slavery that was begun in the 1830s has been an unending project. Though UCSC provides very little in the way of black studies, the campus continues to attract radical students inspired by HistCon’s legacy as a home for renegades like Angela and Huey P Newton, who received a PhD in History of Consciousness in the 1980s when he wrote a dissertation on the U.S.’s war on the Black Panthers. Angela’s legacy lives on at UCSC in the attention that is given in many of our Humanities classes to the history and politics of the prison and incarceration in the U.S., and to the fight for prison abolition.